More than three centuries ago the site on which Fort William now stands was selected as the site of a fort at the head of Loch Linnhe. This was planned as a base from which the garrison might patrol to keep the peace in those lands from which routes met and crossed near the fort. The only local Freemason at that period of whom there is any record was John Cameron of Lochiel, Chief of Clan Cameron, who, according to the historian Gould, was in 1696 a member of the Lodge at Dunblane where he met other Jacobite plotters.

In 1690 General Hugh MacKay strengthened the fort and changed its name from Inverlochy to Fort William after the King. The town growing up beside it, he named Maryburgh after the Queen. In this town of Maryburgh, a frontier garrison town, lived the masons and other tradesmen who came, mainly from Edinburgh, to carry out part of the work planned by General Wade. They brought Freemasonry with them, opened their Lodge in Maryburgh and were represented by proxies at the inaugural meeting of the Grand Lodge of Scotland. An entry in the minutes dated 22nd. December 1749 records that Alexander Watt had been “made long ago at Glenelg and entered a member of our Lodge”. This minute is probably the only record of the Lodge at Glenelg which must have been held, like Lodge Maryburgh, by operative Masons from Edinburgh engaged in work in Wade`s buildings – the Bernera Barracks at Glenelg completed before 1722.

Maryburgh developed, had the trading rights of its merchants protected by an Act of the Scottish Parliament in 1698, became the headquarters of a Customs establishment with a Collector, Tide Waiters, and other officials and saw the rule of law strengthened by the appointment of the first Sheriff in Lochaber. The Governor of the Fort, General Alexander Campbell, was a Freemason, as were the Collector of Customs, William Cowan and the Sheriff, George Douglass. The Master of the Lodge was John MacLachlan, Baillie of Maryburgh, who was not on entirely sympathetic terms with the local “Establishment”; indeed, he was later suspected of having “comforted the Prince with brandy and oatmeal” when the Prince was in the heather in 1746. 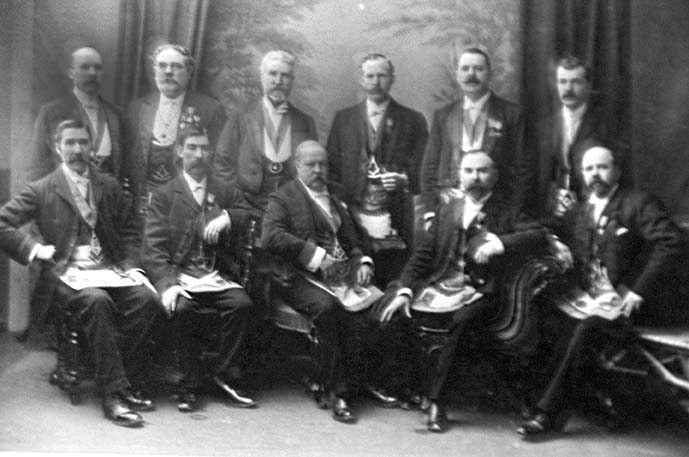 According to the Lodge Minute of 6th. March 1743, John MacLachlan was still Master although soon after that he agreed not to take the Chair at any meeting, but to leave it to his Deputy. At this time new, comprehensive Regulations were made and approved by the Lodge, and arrangements were made to obtain from the Grand Lodge of Scotland a Charter of Confirmation. A final effort to assert his authority failed and John MacLachan submitted to the new regime, and on 30th. November 1743 the new Charter was presented, naming William Cowan, Master of the Lodge.  That Charter still hangs in the Lodge room at every meeting, and in it, the Lodge is named the Lodge of Fort William which is stated to have held regular meetings” meet for several years bygone”.

Under its new name, new regulations, new Charter and new Masters, the Lodge in the years after 1743 proved vigorous and active, holding frequent meetings, observing strict discipline and keeping excellent records. Its members at that time included the Governor of the Fort, the Collectors of Customs, the Sheriff, the Parish Ministers of Kilmallie and Kilmonivaig, a writer, merchants, many operative masons and other tradesmen and a salmon fishery.

The first major difficulty to face the Lodge was the Jacobite Rising of 1745 which is referred to in the minutes in the following terms:  “27th. December 1746, Saint John`s Day, The Lodge be met by order of the Right Worshipful Master Thomas Johnston, agreeable to our Constitution and by virtue of our Charter, with intent to renew our Annual Election of Master, Wardens, etc. And seeing our Monthly Meetings was interrupted by the late most wicked and unnatural Rebellion against our most Gracious Sovereign King George which was happily extinguished by his Royal Highness the Duke of Cumberland who gave the Pretender and his Rebel Forces a Total Rout and Defeat at the Battle of Culloden last April: and now that by the blessing of God ……” But the old Master, John MacLauchlan, “comforted the Prince with brandy and oatmeal”.

A period of intense interest in Freemasonry

This was a period of intense interest in Freemasonry among soldiers, and many officers from the Fort joined the Lodge. They may have been encouraged by General Campbell, but their membership was not merely formal because Military Lodge Charters were subsequently granted to Freemasons in those Regiments whose officers joined Lodge Fort William. The first soldiers to join the Lodge were members of General Roger Handasyd`s Regiment, later the 16th. Foot. In the next year, 1744, officers from Colonel the Hon. Thomas Murray`s Regiment (the 46th. Foot) was initiated and in 1752 this Regiment obtained an Irish Warrant No. 227 under the name” The Lodge of Social and Military Virtues.”

In 1750 Colonel Husk`s Regiment (23rd. Foot) was in the Fort. Its officers joined the Lodge in 1751 obtained a Charter from the Grand Lodge of Scotland. The most interesting military connection is with Colonel Herbert`s Regiment (14th. Foot) later West Yorkshire Regiment. Several members of his Regiment joined the Lodge Fort William and took an active part in its meetings. The Minute of 4th. October 1749 runs, “The Lodge being met and opened in due form it was offered to the Body that our worthier Brother Captain Corniel of the Hon. Colonel Herbert`s Regiment on behalf of himself and other Brethren in said Regiment that they would Incline to have a Power from our Lodge to form themselves into a Regimental Lodge as they are now to leave the Fort which requested the whole Body thought reasonable and order the Secretary to make out a Power to the said Brothers for that purpose until they could conveniently apply for a Charter from a Grand Lodge”. Col. Herbert`s Regiment, the 14th. Foot obtained a Charter from the English Grand Lodge No. 58. Mackey`s Revised Masonic Encyclopaedia gives some information on this Lodge. In 1768 the 14th. Foot arrived in Boston and a Scottish Lodge in Boston, Lodge St. Andrews, secured the support of Lodge No. 58 (Ancients), the Lodge 14th. Foot, in petitioning the Grand Lodge of Scotland to request the appointment of a Grand Master of Masons in America. Joseph Warren was appointed Grand Master of Masons in Boston and a hundred miles round in 1769. 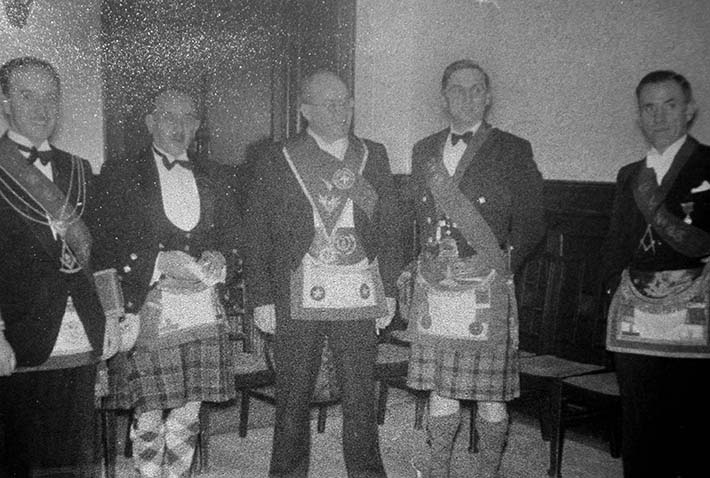 By a further Scottish patent in 1772, Joseph Warren was appointed Grand Master of the Continent of America. He was later killed at Bunker Hill fighting in the American Army. Boston and Bunker Hill are a far cry from Lochaber wherein 1775 the Brethren of Lodge Fort William were quietly settling down in the new building they had erected and in which they were to meet regularly until they replaced it with another on the same site a hundred and thirty years later, unaware, in all probability of the fact that the successors of their Brethren of the Hon. Colonel Herbert`s Regiment was playing such a stirring part in Masonry and in war across the globe. All the documents relating to the building of the Masonic Hall in 1775 were carefully filed and preserved. These papers show that the old name “Lodge of Maryburgh” was still in use although the official name had been “Fort William” since 1743.

The minutes throughout throw light on the life of the community as well as on the affairs of its members. In November 1830 they refer to “the situation of the village owing to the death of several members by the Cholera Morbus, and of others by that disease to the number altogether of forty individuals for the last three months”. In 1840 it was found that the previous year members list “contained several members who had emigrated to various places abroad”. On St. John`s Day in 1854 the minute runs, “The Brethren regret to record that from the great emigration from this country to Australia and the sister colonies and the rapid depopulation from this country of members and eligible persons to become members of the Craft, the number of members on this occasion was comparatively small, and that therefore they did not feel themselves in a position to make a public procession as usual through Fort William.”

In 1829 certain Brethren were elected to the “Degree of Past Master” At a subsequent meeting it was decided that this procedure was regular and lawful, and thirteen more Brethren were elected to this Degree. Some of these Brethren had never held office, yet in the absence of Master, the Chair was usually taken by “one of our Past Masters”. At one meeting the Degree was conferred on an affiliate on the night of his affiliation. In 1867 in a Lodge opened in the “Fourth Degree” it was resolved that only Office Bearers should be raised to the Degree of Past Master. After 1869 there is no record of conferring this Degree except on the elected and installed Right Worshipful Master. The Mark Degree was first worked in the Lodge in 1897.

Please communicate any problems to the Webmaster by clicking here♦